Mahabubnagar lawyers not to defend accused

Four get 5-day jail for drunk driving in Mahabubnagar

Cops seize vehicle with 33 passengers on board in Mahabubnagar 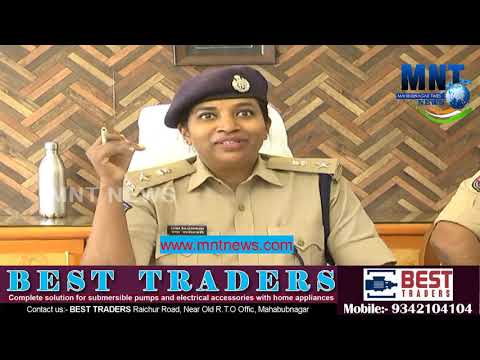 Hurdles halt in their tracks for Metro Rail
Hyderabad: Hyderabad Metro has become a reality despite many hurdles. Many said that it was impossible to build a Metro Rail project in PPP mode; however, it broke the glass ceiling proving many experts wrong and won more than 70 prestigious global and national awards, so far. During 2018, the HMRL has achieved desirable results. Lakdi-ka-pul Metro ROB completed despite many location and traffic challenges. Hyderabad Metro broke several records with high patronage from the beginning and representatives from 25 countries visited the Metro Rail project..
31 Dec 2018

Will make Sircilla top city, says KTR
Rajanna Sircilla: Telangana Rashtra Samithi (TRS) working president and local MLA K T Rama Rao on Friday promised to develop Sircilla into a top city in the State by providing all facilities. Rama Rao, who was here to take part in various developmental programmes, held a review meeting with heads of various departments at his camp office. Speaking on the occasion, he instructed officials to work towards providing all facilities required to make Sircilla a top city. Stating that there was no question of compromise in providing facilities, he wanted officials to speed up works being taken up for developmental of the district headquarters. He said the new government, which was formed two months ago, had another 58 months to take up works, he said and asked the officials to prepare an action plan to complete works within the specified time. It was necessary to develop a ring road for future and a plan should also be prepared to link multiple roads to the ring road. Asking the officials to complete works on the second by-pass road as early as possible, Rama Rao instructed revenue officials to speed up land acquisition process for the two national highways sanctioned for the district..
09 Feb 2019

Leave State subjects to States: KCR
Hyderabad: The Central government should leave several subjects that are part of State list to be taken care of by the States, Chief Minister K Chandrashekhar Rao said. “States,” he said, “need to be given more space to prioritise issues at their level. Even in the subjects listed under the State List, there are numerous Centrally-sponsored schemes.” With respect to subjects under Concurrent List, subjects dealt by both Centre and States, the Chief Minister said in the past, during discussions with Sarkaria Commission, States wanted Concurrent List abolished as the Union governments were acting in a monopolistic manner..
20 Feb 2019
Show More..