Technology is turning the world into an illusion. The latest example is AI or artificial intelligence which is capable of generating fake faces. So imagine you are scrolling through a dating app thinking you've found 'the one', but in reality, it is only a fake face of a bot! Fortunately, the AI-generated faces have some telltale signs which you can look out for to skip getting duped. Computational artist Kyle McDonald says that there are certain tips one could follow to look for fake AI-generated faces, Quartz reports..

Asaduddin Owaisi welcomes IAF strike
Hyderabad: All India Majlis-e-Ittehadul Muslimeen on Tuesday welcomed the Indian Air Force raid on terror camps in Pakistan with its president Asaduddin Owaisi saying he and his party welcomed the action. He told reporters: “I was hoping that this action would have happened 12 days ago.” Owaisi said that India his party asks the Government of India to be geared up to repel and take action if Pakistan mounts reactionary action or strikes. “We hope our Government, our Army, Air Force and Navy are ready to do so,” he said..
26 Feb 2019

KCR's efforts to form third front is to help BJP: Congress MP
Hyderabad: Criticising TRS Chief K Chandrasekhar Rao's efforts to forge a federal front of regional parties, Congress leader Rajeev Gowda Tuesday said it was an attempt to help the BJP return to power after the next general elections. Claiming that the Chief Ministers of different states, whom Rao met would not fall for the idea of a third front, he said the leaders of regional parties would join a broad coalition with Congress, leaving only TRS in the 'Federal Front.'.
25 Dec 2018

GWMC bags award for running FSTP successfully
Warangal Urban: Greater Warangal Municipal Corporation (GWMC) has bagged the award ‘Pioneer in Faecal Sludge and Septage Management’ for its outstanding performance and achievement in setting up and operating a dedicated 15KLD Faecal Sludge Treatment Plant (FSTP). The award was given by National Institute of Urban Authority (NIUA) during the national workshop on Non-networked Sanitation Systems for India held at Mussoorie, Uttarakhand, on February 27 and 28, said GWMC Commissioner, N Ravi Kiran. Representatives of Administrative Staff College of India (ASCI), who are knowledge partners of GWMC, attended the conference and received the award on behalf of GWMC..
18 Mar 2019

Focus on campaign, KCR tells nominees
Chief Minister K Chandrashekhar Rao issued B-forms to all the 107 TRS candidates at a meeting convened for them in Telangana Bhavan on Sunday evening. While the Chief Minister will file his nomination on November 14, the majority of the party candidates are also said to be gearing up to file their nominations on the same day..
12 Nov 2018 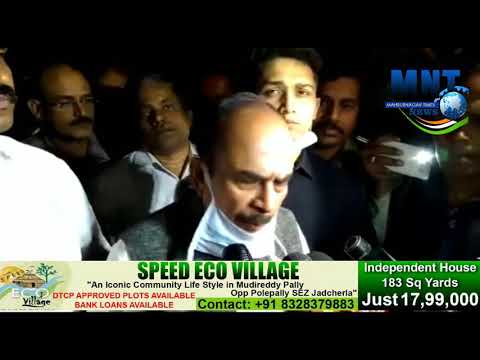 Cricketer Sanju Samson ties the knot with classmate
Thiruvananthapuram: Kerala cricketer Sanju Samson, who has played for the Rajasthan Royals and also donned the national blue, tied the knot with his long-time girlfriend Charulatha on Saturday. The former college mates had a simple ceremony at a resort in Kovalam, earlier in the day. The wedding reception is slated later in the evening..
22 Dec 2018
Show More..