Hyderabad: Efforts of the Telangana government to provide security of life to vulnerable sections of people through a series of welfare measures had led the State being recognised as number one in the country in resource allocation for this sector, Governor ESL Narasimhan said. During his joint address to the Legislative Council and Assembly here on Saturday, the Governor said the welfare schemes introduced by the State government created self-confidence among the people of Telangana and provided them the assurance that their lives are secure in the State..

Karimnagar Umrah pilgrim dies in Makkah
Jeddah: A Telangana Umrah pilgrim died in Makkah on Tuesday due to sudden health complications. Abdul Haleem, 62, a resident of Kashmirgadda in Karimnagar and retired teacher, came to Saudi four days ago for the Umrah pilgrimage along with his wife Tasneem Sultana, who is also a government teacher in Peddapalli. After performing Umrah on Tuesday, Abdul Haleem was returning to the hotel where he was staying, when he collapsed after he developed chest pain. He was immediately rushed to the hospital, where he died, said Masrath tour operator. The family of the deceased is planning to conduct Abdul Haleem’s last rites in Makkah. Every day scores of Telangana pilgrims visiting to Makkah for Umrah. Umrah is an Islamic pilgrimage to Mecca, Hijaz, Saudi Arabia, performed by Muslims that can be undertaken at any time of the year, in contrast to the Ḥaj which has specific dates according to the Islamic lunar calendar..
24 Apr 2019

Woman dies after botched c-section surgery in Hyderabad
A botched caesarian (c-section) surgery claimed the life of a woman 10-days after the delivery due to an infection..
22 Oct 2018

Kaleshwaram water by June: KCR
Dornakal: Chief Minister K Chandrashekhar Rao on Friday assured the people of Dornakal that once water began to flow from Kaleshwaram project next year, the constituency would receive all the irrigation water it required. Addressing a campaign meeting here, he said the government was spending Rs 1,000 crore for repairing Sri Ram Sagar Project canal system. “I promise that when Kaleshwaram project is inaugurated in June, you will get a lot of water. This is my promise,” he said. The constituency, he said, had the highest Girijan population in the State, and the TRS government, after being voted back to power, would solve all the issues, particularly those related to land, faced by the tribal communities. “We will solve all issues such as those related to podu lands within six months,” he said..
23 Nov 2018

Congress stages protest at Collectorate
Bhongir: Congress senior leader and TPCC Treasurer Gudur Narayana Reddy on Friday demanded that the State government immediately pay the compensation to the farmers whose lands were acquired for construction of Baswapur reservoir. Narayana Reddy, along with the families of displaced farmers, led a massive day-long dharna in front of the Yadadari Bhongir District Collectorate. Addressing the dharna, Narayana Reddy said the Baswapur reservoir of 11.39 tmcft would submerge over 3,400 acres of land. It includes nearly 1,600 acres of land belonging to farmers. He said although the State government acquired the land from farmers about either months ago and the documentation was completed nearly five months ago, no compensation had been paid for the lands acquired..
29 Dec 2018 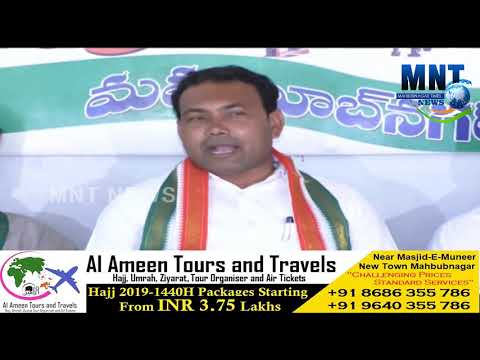