Hyderabad: The ongoing Panchayat elections have gone hi-tech in the State. The State Election Commission (SEC) has inducted advanced software, ‘Te-poll’ to facilitate free and fair elections. The new software helps avert errors in poll related activities like uploading the election expenditure and other activities. It is also useful in preparing the electoral rolls and download the same by the voters and also the contestants. It has benefitted the contestants in the local body elections and the election authorities monitoring the poll preparedness from time to time. .

Real estate needs industry status: MP Kavitha
Hyderabad: Real estate is attracting significant investments and providing employment opportunities. In view of these, it deserves to be treated as an industry, said TRS MP K Kavitha. Speaking at the launch of Credai property show at Hitex, she said she would lobby with the Government to get industry status for the real estate sector. “These days, a good real estate project sees at least Rs 100 crores investment. Units in other sectors get benefits, incentives and tax breaks as they are identified as industry. We understand that real estate should be given similar treatment,” she said. .
15 Feb 2019

Chandrababu will stall Telangana irrigation projects: KTR
Rajanna-Sircilla: Minister for Information Technology KT Rama Rao said irrigation projects of Telangana would be the prime target of Andhra Pradesh Chief Minister, N Chandrababu Naidu if Mahakutami, by any chance was voted to power. He will not allow the projects to be completed as he had scant regard and concern for the irrigation needs of Telangana farmers. Naidu, who wrote 30 letters to Central government against Telangana projects, would do injustice to farmers by stalling irrigation projects if he was allowed to play a role in Telangana governance. Resources of the State would also be looted in Mustabad mandal on Tuesday..
13 Nov 2018

Applications sought for judicial training in Hyderabad
Hyderabad: District Collector M. Raghunandan of Rangareddy sought applications from SC law graduates from Rangareddy, Medchal and Vikarabad districts for training in judicial administration, through a press note issued on Saturday. Eight SC candidates would be selected for the training. Selected candidates have to undergo the training for a period of three years and a stipend of Rs 1,000 per month would be given to selected candidates. First year trainees would be granted Rs 6,000 for purchasing law books and furniture. Selected candidates would be trained under government pleaders, public prosecutors and assistant public prosecutors working in district, mobile, session and division level courts..
23 Dec 2018 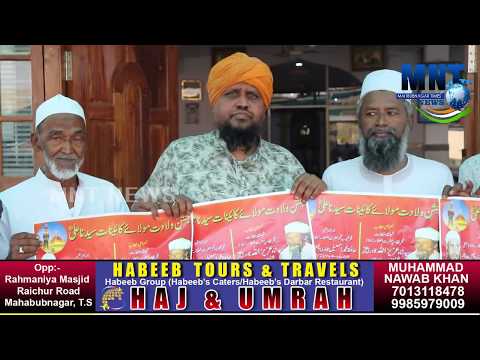 YSRCP makes plea to Andhra voters
Kukatpally: People from Kadapa constituency met at Metro Marvel Garden in Kukatpally on Sunday. The organisers said that the get-together was organised to appeal to those hailing from Andhra Pradesh to go to their respective constituencies and sensitise people on the importance of brining YSRCP to power in Andhra Pradesh. .
11 Feb 2019

RGUKT to hold student entrepreneurial conclave
Nirmal: Rajiv Gandhi University of Knowledge and Technologies (RGUKT)-Basar will organise the first student-run entrepreneurial conclave, E-Summit’19, with the theme ‘Against the Odds’ at SAC Auditorium on Saturday and Sunday. Event coordinator P Nikhila and head K Pruthvi said the summit would focus on enhancing the entrepreneurial ecosystem of the institution through workshops, mentor hours, talks, idea-pitching sessions, investor meets, policy discussions, startup expo, simulation events, panel discussions and many more. It will provide budding entrepreneurs with an opportunity to discover new avenues of entrepreneurship, exposing them to the needs of today’s society..
08 Mar 2019
Show More..