Strong leadership at Centre need of the hour: Kavitha...

Hyderabad: Nizamabad MP K Kavitha gave a clarion call to youth for launching a movement to bring change for a strong leadership at the Centre that would ensure all-round development of the nation. She felt that the nation did not made visible progress as the governments failed to utilise the available resources to provide essential infrastructure to people. She was addressing the regional conference of National Students’ Parliament, Kerala-2019 on ‘Casts and it’s Discontents’ organised at Thiruvananthapuram as part of the ‘Festival on Democracy’ celebrations on the occasion of diamond jubilee celebrations of Kerala Legislative Assembly..

Rural life glimpse for students in Sangareddy
Sangareddy: There are world of opportunities for those who think innovatively. Ajith Antony Netto (33) is one among such people who found a business opportunity where no person ventured previously in these parts of State. As the new generation of kids miss the feel of agriculture and rural life due to rapid urbanisaton, Ajith, who used to arrange field trips for corporate school students for over two and half years, has tapped on the farm and rural life in a four acre plot near Rudraram village in Sanagreddy district. Many corporate schools requested him to arrange a glimpse of rural life for their children. Anthony rented the land located very close to Hyderabad-Mumbai highway and started the business naming it after his mother and son (Annamma and Abhi Agro Farms) during the last May..
08 Feb 2018

18-year-olds asked to entrol in voters list
Siddipet: District Collector Krishna Bhaskar said that all people who reached 18 years of age should enrol their names in voters’ list. He visited voter enrolment camp organised at Mittapalli village on Sunday. He enquired about the eligible voters in the village as per the polling booth..
04 Feb 2019 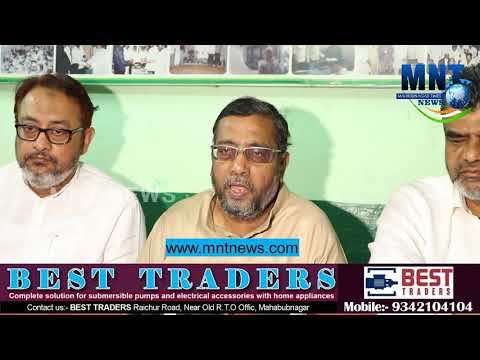 MLAs expulsion: Officials told to serve personal bond for not appearing in court
Hyderabad: Justice Dr P Shiv Shankar Rao of the Telangana High Court directed Assembly Secretary V Narasimhacharylu and Law Secretary V Niranjan Rao to serve a personal bond of Rs 10,000 to the Registrar (Judiciary) in order to get bail in the contempt case filed by Congress MLAs Komatireddy Venkat Reddy and S A Sampath Kumar. The case relates to the cancellation of the Legislative Assembly membership of the two MLAs. When the Assembly Secretary and Law Secretary failed to appear in court, Justice Siva Shankar Rao issued bailable warrants against the contemnors and directed the duo to be present in the court..
16 Feb 2019

Will clear Podu lands issue in six months, says CM
Yellareddy: Chief Minister K Chandrashekhar Rao promised to resolve within six months of coming to power all the pending issues pertaining to Podu cultivation lands of tribals and Part-B of land records purification programme, besides issuing ROFR (Record of Forest Rights) pattas. He also assured to pursue the ST reservations with the Central government again and fight for the Constitutional amendment if required..
20 Nov 2018
Show More..