Hyderabad: AIMIM president and Lok Sabha member Asaduddin Owaisi on Wednesday expressed fears that BJP was seeking to push India into becoming a racially based nation..

Will the big cat survive?
Adilabad: The death of a tiger and a leopard in a short span of 10 days questions the survival chances of the big cat in the erstwhile Adilabad district. Despite the State government spending crores of rupees and implementing stringent laws to protect wild animals, it is due to the negligence and alleged inefficiency of the local forest officials, the lives of wild animals are critically endangered. Poachers are at a free hand to trap tigers and leopards and kill them. Many tigers, whose number has been increasing in the nearby Tadoba Andhari Tiger Reserve in Chandrapur district, Maharashtra, are entering into Adilabad district passing through the forest. Taking advantage of this, hunters are killing leopards and tigers for their skin. .
18 Jan 2019

Ameerpet to Hi-Tec City Metro rail trial runs on
Coinciding with the first anniversary of the launch of the Hyderabad Metro’s operations, trial runs on the Ameerpet – Hi-Tec City stretch of Metro Corridor-III began here on Thursday. A team of technical experts and engineers led by HMRL MD NVS Reddy and L&T MRHL MD KVB Reddy travelled by a Metro train on the stretch and observed various critical parameters and performance of the train during the trial run. .
30 Nov 2018

JNTU-H to hold conference on urban water management
Hyderabad: A three-day international conference on Hydrology and Water Management focusing on ‘urban water management for sustainable development' will be held between February 12 and 15 at Jawaharlal Nehru Technological University, Hyderabad (JNTU-H).Disclosing the details here on Saturday, Prof C Sarala, conference convener and Head of Centre for Water Resources (CWR), JNTU-H Institute of Science and Technology said, nearly 100 technical presentations are expected to be presented during the three-day conference. .
10 Feb 2019

KCR moots State-level administrative service
Hyderabad: Chief Minister K Chandrashekhar Rao on Friday mooted the idea of creating a Telangana State Administrative Service on the lines of the Indian Administrative Service to provide an effective administrative system that would be in sync with the conditions existing in the State. The Chief Minister said a powerful official body has to be in place at the district level, headed by District Chief Administrative Officer and several senior officers. Chandrashekhar Rao, in the course of his electioneering for the just-concluded Lok Sabha elections in the State, had referred to the nomenclature surrounding the District Collector, and said it was passe`. .
12 Apr 2019 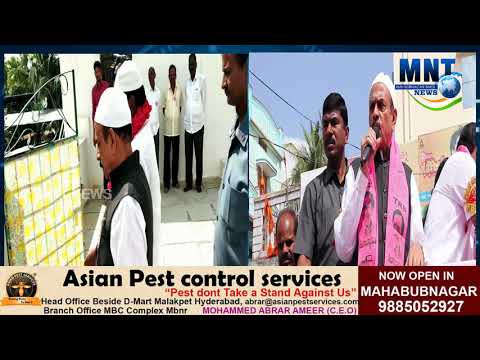 Drainage overflows, but GHMC unmoved by pleas at Moulali
Moulali: Drainage flowed on road due to a broken drainage pipe near Moulali traffic police station on Sunday, causing severe inconvenience. Local residents registered a complaint to GHMC, but so far no action has been taken, local residents lamented. Commuters, especially two-wheelers, are finding it very difficult to pass through the drainage water flowing on the road. Traffic staff too could not perform their duties due to the stench emanating from drainage water. Local residents appealed the local corporator to respond and speak to authorities concerned to address the issue..
31 Dec 2018
Show More..