28 candidates in fray for Huzurnagar by-poll...

Suryapet: A total of 28 candidates are in the fray for the October 21 Huzurnagar Assembly constituency by-election after withdrawal of nominations on Thursday. The by-election will essentially be a triangular contest between the ruling TRS, and the opposition Congress and BJP..

Profiles of Mahbubnagar MLA V.Srinivas Goud
Srinivas Goud played crucial role in uniting the government employees of Telangana region of erstwhile Andhra Pradesh during the separate Telangana movement. He has been inducted into the State Cabinet after getting elected from Mahbubnagar constituency for second consecutive term. He served as the Chairman of Telangana Gazetted Officers Association during separate statehood movement. During his stint as a government employee, he served as commissioner for several municipalities in erstwhile Ranga Reddy district..
19 Feb 2019

Hyderabad: TV serial actress ends life
Hyderabad: A television serial actress reportedly committed suicide at her residence in Srinagar colony of Punjagutta police station late on Monday night. According to the Punjagutta police, the woman identified as Jhansi, lived at Sri Sai Apartment in Srinagar colony. On Tuesday morning, she was found hanging to the ceiling fan in the house by some relatives who alerted the police. On receiving information, the Punjagutta police rushed to the house and shifted to body Gandhi Hospital mortuary for postmortem examination. The police denied reports of any suicide note being found at the place..
06 Feb 2019

‘State to focus on natural farming’
Wanaparthy: Minister for Agriculture, Cooperation, Marketing, Food, Civil Supplies and Consumer Affairs S Niranjan Reddy on Wednesday spelt out priorities of the State government with regard to agriculture and its push towards natural farming in Telangana. Addressing the gathering at a ‘natural farming seminar’ organised by Vishwa Manavatha Sanastha here, Reddy said Chief Minister K Chandrashekhar Rao’s objective was to see that farmers come out of the debt spiral first, ensure that they become self-confident and finally economically self-sustaining. “Only after farmers feel financially secure, will they listen to the government and cultivate whatever it suggests them to,” he said referring to following natural farming methods..
27 Feb 2019 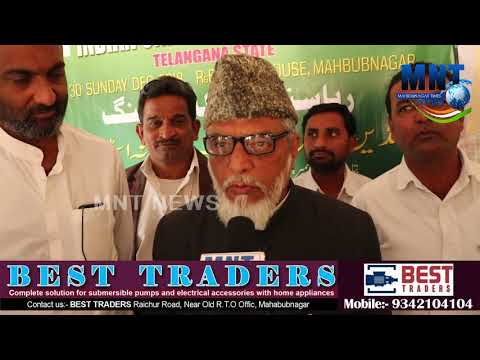