Use grants of DMFT for taking up prioritised works: Indrakaran Reddy...

Nirmal: Spend grants of District Mineral Fund Trust (DMFT) for taking up prioritised works, Minister for Forests, Environment, Endowments and Housing, Allola Indrakaran Reddy told the authorities concerned. He was participating in a meeting of the DMFT held here on Tuesday. He was joined by Zilla Parishad Chairperson K Vijayalaxmi and Collector M Prashanti..

Galaxy Home speakers to be easy on wallet
Samsung is reportedly planning a cheaper version of its Galaxy Home smart speaker powered by its voice assistant Bixby. While the specifications of the new speaker are not yet known, it is presumed to have fewer of the features of the main Galaxy Home that Samsung announced in August. While the main Galaxy Home, which is yet to hit the market, could compete with Apple HomePod, which retails for $349, the mini Bixby-powered speaker could take on Google Home and Amazon Echo which are available for less than $200. Originally reported by SamMobile, the mini Bixby speaker might have fewer microphones than the Galaxy Home and perhaps lack a subwoofer. The premium Galaxy Home, which was showcased in the US during the flagship Galaxy Note 9 launch, is likely to feature eight microphones..
01 Jan 2019

Find solutions for societal problems, NIT Warangal students told
Warangal Urban: NIT Warangal director Professor NV Ramana Rao urged the students to think innovatively for finding solutions for societal problems and said that the NIT-W is always in the forefront in giving guidance to science teachers and students regarding the projects. Addressing the students after inaugurating the Inspire-Manak 2019, a State-level science exhibition, along with Wardhannapet MLA A Ramesh and State Council Educational Research and Training (SCERT), Director B Seshu Kumari at the social welfare residential school, Madikonda here on Saturday, NV Ramana Rao said the schools can log in to NIT Warangal website and register to get an opportunity for visiting the various departments of NIT Warangal. He also stressed that the students have to solve the problems of the rural areas with innovative ideas. “The projects should be simple and cost-effective,” he added..
03 Feb 2019

TRS will play key role at Centre, secular KCR won’t go with Modi, says KTR
Stating that TRS chief and Caretaker Chief Minister K Chandrashkhar Rao is a true secularist and there was no comparison at the national level, caretaker minister KT Rama Rao today asserted that they will play a key role at national politics in 2019 and will not tie-up with BJP-led Narendra Modi Government at the Centre in future. The TRS and the BJP have ideological differences and will not go together despite any political developments after 2019 general elections, he claimed. .
17 Nov 2018

Demolition drive continues in Hyderabad
Hyderabad: The sustained drive to clear encroachments in the city taken up by the Greater Hyderabad Municipal Corporation (GHMC) continued here on Saturday. Teams of the civic body’s Enforcement Vigilance and Disaster Management (EVDM) wing today focussed on Kukatpally Housing Board (KPHB) area and pulled down 646 identified encroachments. With this, the cumulative total of encroachments demolished in the city till date stood at 16,046..
17 Feb 2019 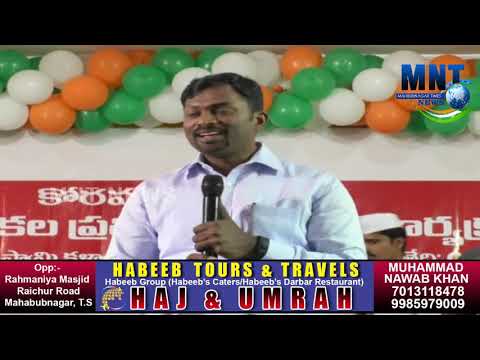