Sangareddy: Finance Minister T Harish Rao has called upon Intermediate and Degree college faculty to improve the examinations results. Addressing the faculty and students after inaugurating the new Zilla Parishad High School building in Patancheru on Monday, the Minister assured to get lunch and evening snacks served for the students of Government Junior College and Government Degree College students, which were located on the same premises in Patancheru..

BJP announces first list of 10 names, DK Aruna finds place
Hyderabad: The Bharatiya Janata Party on Wednesday evening announced names of 10 candidates who will contest the Lok Sabha elections in Telangana. The party is yet to announce names for seven more constituencies. Former Congress Minister DK Aruna, who joined the BJP a couple of days ago, is being fielded from Mahbubnagar constituency. Missing in this list is the party candidate to contest from Hyderabad Lok Sabha constituency where AIMIM president Asaduddin Owaisi is seeking re-election..
21 Mar 2019

Voter enrolment: Collector seeks parties support
Kothagudem: District Collector Rajat Kumar Saini appealed to the political parties in the district to extend their cooperation for the success of voters’ enrolment drive. He held a meeting with representatives of different political parties here on Friday in the wake of ensuing Lok Sabha elections. He said the special drive scheduled to be conducted on March 2 and 3, was aimed at enrolling every eligible person in voters’ list..
01 Mar 2019

Telangana: Three severely injured as SUV overturns in Mulugu district
Mulugu: At least three persons were seriously injured when an SUV (Toofan) overturned at Jannathapuram ‘Y’ junction in Wazeedu mandal in the district on Wednesday. In all, 10 others, who were also travelling in the same vehicle suffered minor injuries in the accident. The grievously injured were first shifted to Eturunagaram government hospital and later to MGM hospital for treatment, according to SI Kirshna Prasad..
13 Mar 2019 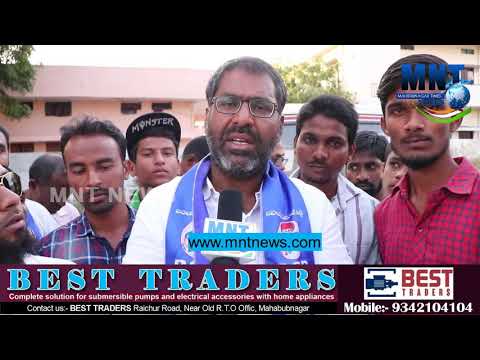 Forest officials get new detective to tackle wildlife killings
Nagarkurnool: The Forest Department has got a specialist to detect those killing wild animals and to bring them to book. This new detective uses his nose to sniff out violators of jungle laws and is just 1-year-old. Bruno, a sniffer dog of the Forest Department has been given training in detecting wildlife hunters at Gwalior in Madhya Pradesh for 10 months. Bruno is just one-year-old and is a male German Shepherd..
24 Jan 2019
Show More..